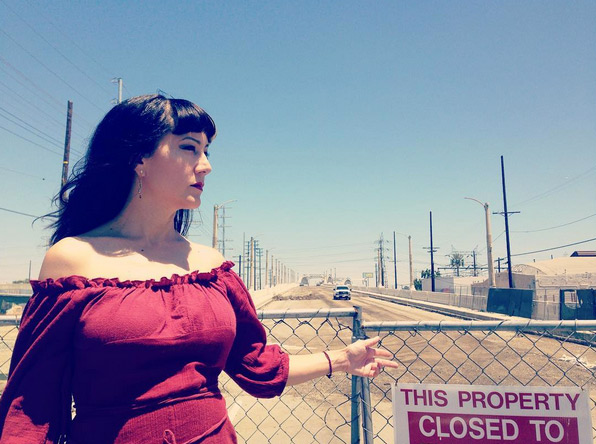 Now back from Portland, I feel like suddenly the birds are singing in Los Angeles. Were they singing before and I just didn’t notice them, as if I was in a dark cloud? After being in the dark cloud of Portland, where there are no birds singing except for the occasional bluejay’s sharp chirp, I may be just noticing the LA birds again. I was blind to the music, and now I am awake. Born and raised here in the city of angels, I find that going on trips away from here really makes me appreciate the blooming metropolis that is my home.

Recently, photographer Dennis Donahue and I took a photo-field trip to view the last glimpses of the 6th street bridge before the construction crews demolished it. I remember my mom and I driving on this bridge when I was about 4 or 5, and I felt so small on the bridge that was so gigantic. Looking now at it, it seemed diminished in size, as if I had outgrown my own shoes.

The same goes for Union Station. As a kid, I really thought that Union Station was all a city all into its own, and that Olvera Street was a new kind of small villa that thrived outside of L.A.! I wandered through the gates of Olvera Street, entering a new city in the night, seeing the vendors, thinking I must be in Mexico. I must have been only five years old.

Los Angeles is the melting pot of races coming together like a rainbow colored lollipop, I moved to North Carolina when I was 11. I had never appreciated nature until I moved to the East Coast. At first I experienced culture shock when we moved to Charlotte, NC, but eventually the forests that surrounded the tiny suburban areas became my sanctuary. In times of sorrow, I fled to the trees to write or draw. That’s why I have to name Charlotte as 1 of my homes.